To be happy in Holland, just smile and say cheese. On this trip, we have happily tasted a lot of Dutch cheese, attended the country’s greatest cheese market, found the happiest cows, visited the famous cheese town of Edam, and taken up residence just outside the other famous cheese town of Gouda.

Upon our arrival, we enrolled in a two-hour wine and cheese class. Our instructor schooled us in the nuances of taste, texture, and mouth feel, and helped us discriminate between young, old, goat, sheep and cow cheeses. The only problem was that we drank so much wine that we forgot everything we learned.

In Alkmaar, we witnessed the oldest and largest ceremonial cheese market in the Netherlands. Every Friday morning between April and the end of September, tourists descend for this ostentatious reenactment of “cheesy” Dutch salesmanship. 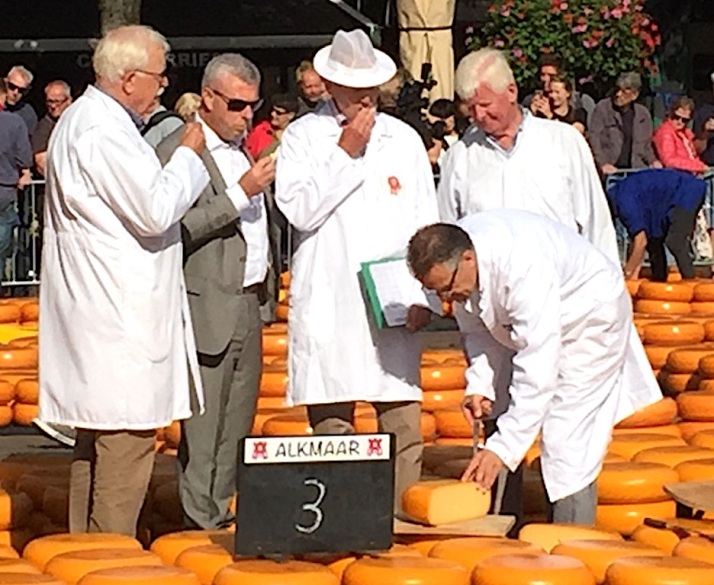 Inspecting the Cheese at the Alkmaar Cheese Market

Traditional cheese vendors in silly hats greet customers in the city’s central square. Here, after inspectors in white lab coats examine the cheese, it is auctioned off with a ritualistic clapping of hands. Only after the cheese is lugged to the certified scales for weighing is the transaction finalized. 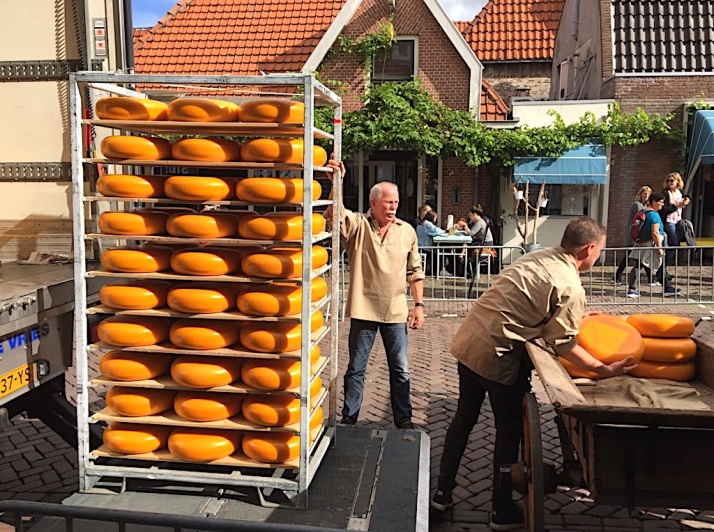 Backstage at the Alkmaar Cheese Market

To investigate the source of all this coagulated milk fat, we stealthily snuck backstage. Around the corner, we uncovered two young rascals secretly loading the cheese wheels back into a large semi-trailer truck. Like bumbling detectives, we noted the big block letters on the side of the truck that cryptically spelled out “CONO”.

After a few more inquiries and a wandering bike ride through the wholesome green pastures east of Alkmaar, we discovered CONO Kaasmakers. In this factory co-op of 475 happy farmers, they use natural processes and milk from happy cows to make Beemster cheese. Those CONO cows are so happy that they are also the exclusive milk provider for Ben & Jerry’s ice cream in Europe.

On a more direct route from Alkmaar, we also visited the famous cheese town of Edam. Edam cheese is sold in spheres or rounded cylinders with coats of paraffin wax. If you have ever nibbled on a red Mini Babybel, you have eaten young Edam cheese.

That’s not a Bocce Ball, Knucklehead!

Edam matures slowly and travels well without spoiling. During the 17th century, the Dutch East India Company stocked their sailing vessels with Edam cheese to nourish the mariners and deckhands. Because it remained delicious even after long sea voyages, it remained the world’s most popular cheese for nearly 400 years.

Nowadays, the popularity of Edam has been eclipsed by that other more famous Dutch cheese, Gouda. Gouda contains more fat than Edam, giving it a creamier texture that flows more smoothly when melted. Alas, it appears that the decline in Edam’s appeal was due to the gastronomic rise of macaroni and cheese and grilled cheese sandwiches. 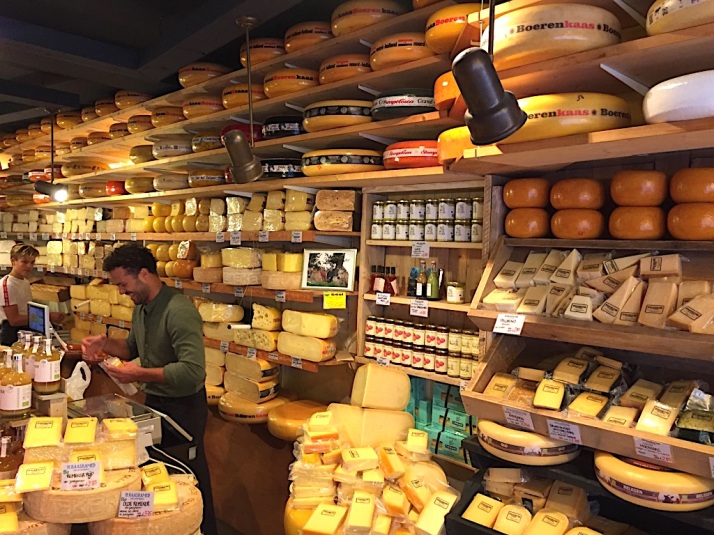 Now that we are staying just outside of Gouda, we are happily inundated with great cheeses. Here, speaking Dutch is not necessary when buying that next piece of Beemster, Edam, or Gouda. I just smile and say cheese.

Kid in a Candy Store

Blogger’s Notes: The word for cheese in Dutch is kaas, and the town of Gouda is pronounced “How-dah”. We amateur detectives could never figure out the abbreviation CONO, but their Extra Aged (X-O) Cheese was worth searching for!

20 thoughts on “Smile and Say Cheese”