In the Netherlands, there are more bicycles than people, and about three bikes for every passenger car. With the flat landscape, short distances between population centers, and gasoline prices of US$7 per gallon (€1.65 per liter), cycling is a logical transportation option for the parsimonious Dutch. 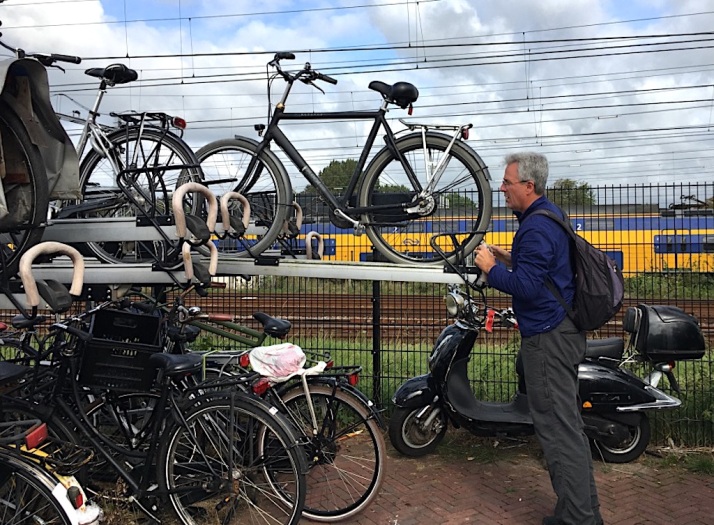 With their upright or “sit-up” construction, Dutch bikes are comfortable and a pleasure to ride. They are sturdy, easy to maintain, and built to endure the wet weather. They typically come equipped with chain covers and mud fenders, so you can ride while wearing regular clothes. 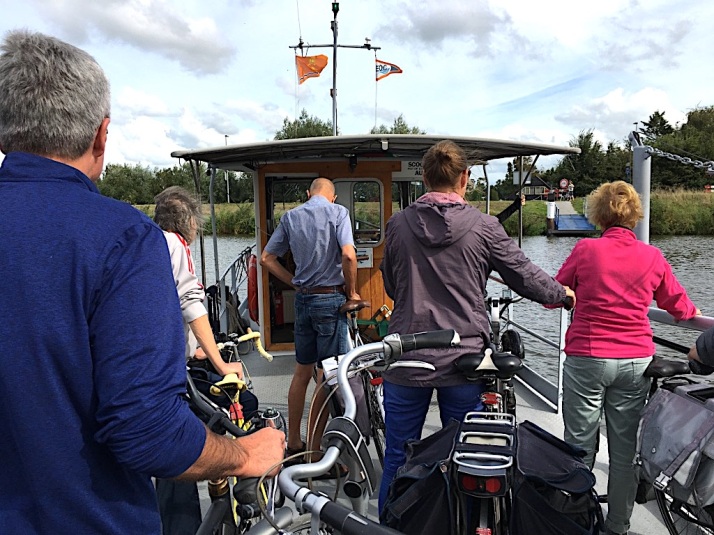 Crossing a North Holland canal on a free bicycle ferry

Even though helmets are usually only worn by children and racers, the Netherlands is the safest country for cycling in the world. They have developed an excellent bicycle infrastructure, including ubiquitous cycle paths, protected intersections, and intercity routes. Here, it is illegal to cycle under the influence or to ride at night without front and rear lights.

Man on a City Bike, Amsterdam

The most common bike in the Netherlands is the simple “City Bike” with a single speed and foot brakes. Another familiar model is the “Granny Bike” (Omafiets), which is characteristically black, upright, and built with skirt guards and a step-through frame. With the evolution of electronic-assist capability, we are continually overtaken by gray-haired old ladies on their e-omafiets. 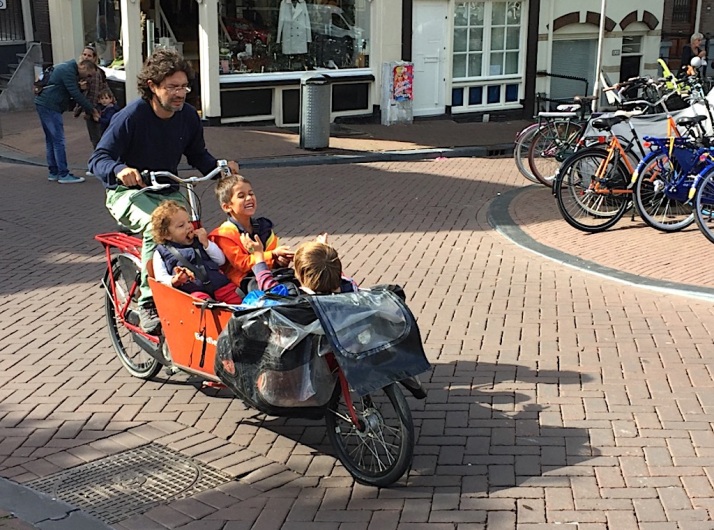 Another smart and pragmatic bike is the beloved Bakfiets, which is a cargo or freight bike with a wheelbarrow-like bucket on the front. Although originally designed for commercial deliveries, it is now mostly used by parents to transport their young children. 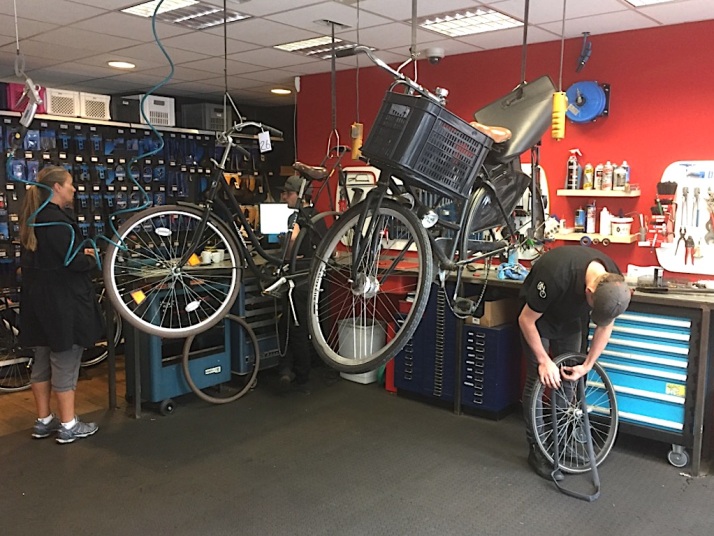 Esther negotiating at a local bike shop in Alkmaar

While planning our two-month stay in the Netherlands, we originally thought we would rent bikes for a month at a time. After looking around town for rental bikes, we determined that it would be more economical and convenient to purchase second-hand bikes, and try to re-sell them when it comes time to return home. 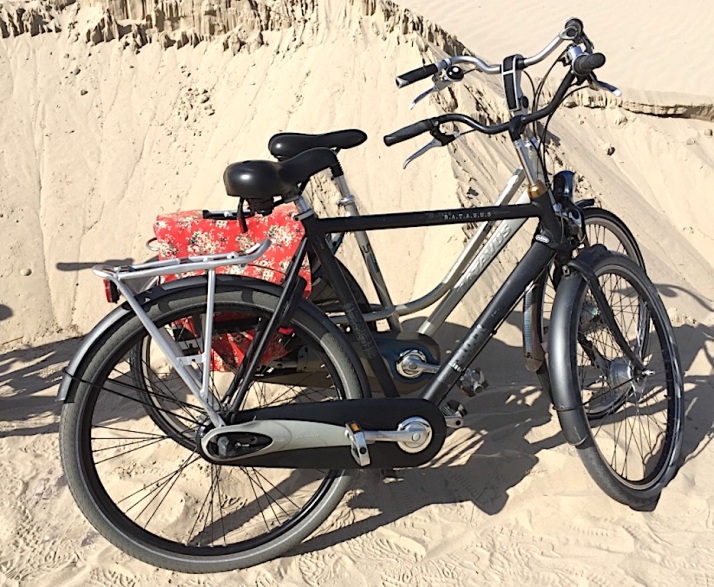 The bicycles we bought are worn but fully functional and outfitted with all the standard features, including bells, lights, and locks. Esther’s bike has eight speeds and a useful pair of saddle bags for our trips to the grocery store. My bike only has three speeds but came with a handy mounted compass for this old-school navigator.

Esther riding a rental bike on the Island of Texel, North Holland

With my low-tech compass and our cell phone mapping apps, we have successfully plotted our way around the province of North Holland. We now have several favorite routes into the flat green polder lands, hilly coastal dunes, or just down to our local ice cream joint. 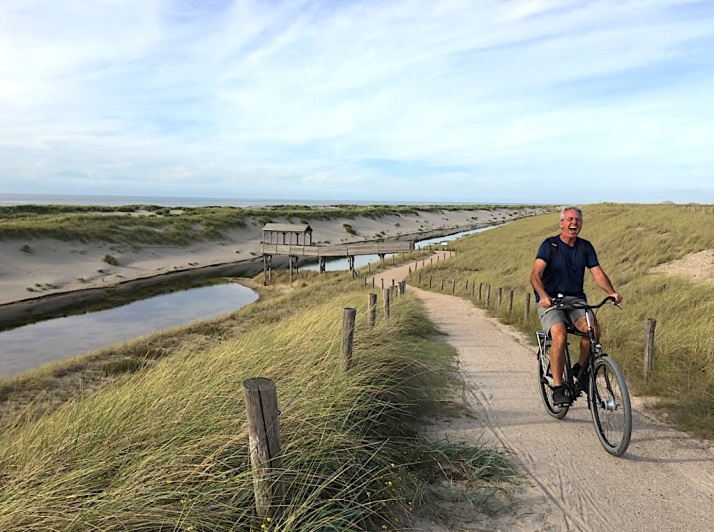 An agonizing climb in the hilly dunes of North Holland

From the saddles of our new used Dutch bikes we are following the local way of life and enjoying the views. Free from traffic jams and parallel parking spaces, it has clearly been cheaper, healthier, and more relaxing finding our way around the Netherlands on two wheels.

Esther’s bike in the polder lands

26 thoughts on “Netherlands on Two Wheels”