A bridge seems an apt metaphor for the events of the past week. Before leaving the Basque Country to start our month in Madrid, we went to see Bilbao and revel in its river crossings. 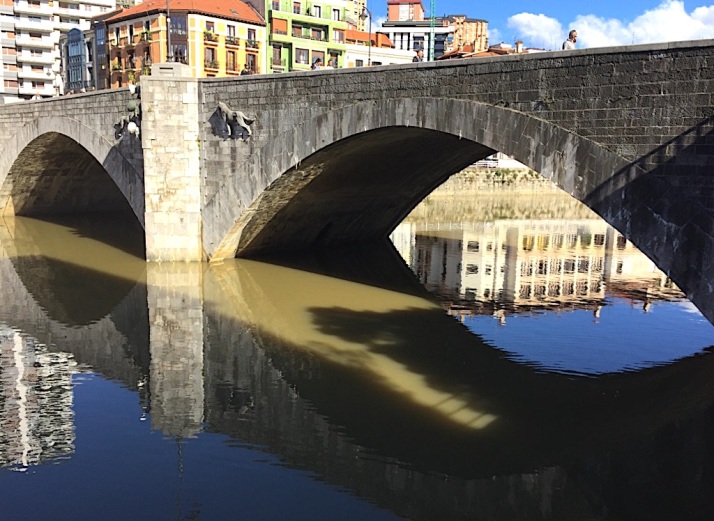 Bilbao is the biggest city in the Basque Country. Formerly a declining industrial center of dilapidated shipyards and run-down steel mills, it is now a bright and revitalized city. Meandering through Bilbao is the once-polluted Nervión River, now remediated and crossed by a series inspiring bridges. 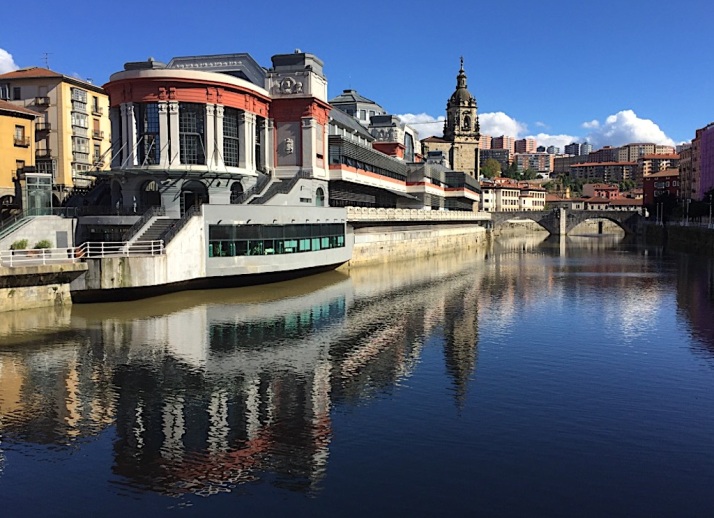 We started at Bilbao’s oldest bridge, the 13th century San Anton Bridge, for centuries the city’s only river crossing. From its medieval arch, the juxtaposition of the old San Antón church alongside the modern Ribera Market illustrates the span of Bilbao’s history and the progress of its revival. 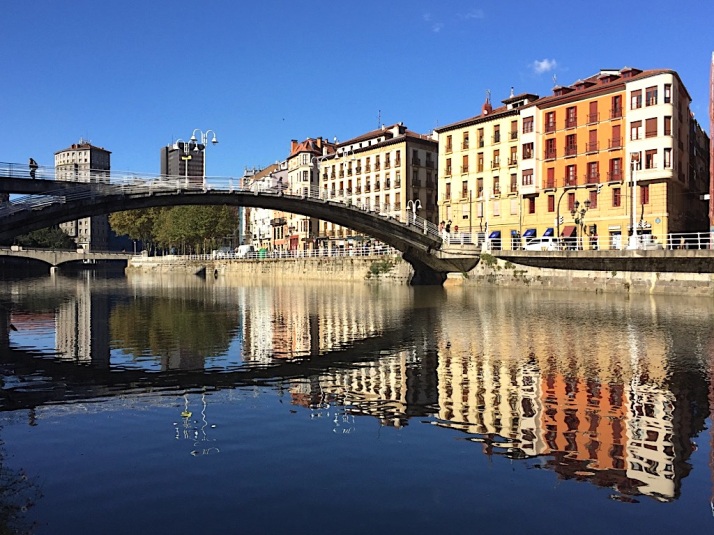 From here, we followed a wide pedestrian esplanade downstream to see the city and behold the rest of its brilliant bridges. Next in line was the pedestrian-only San Francisco Bridge. In contrast to the weighty stone construction of the San Anton Bridge, its delicate arch swept effortlessly over the glassy waterway. 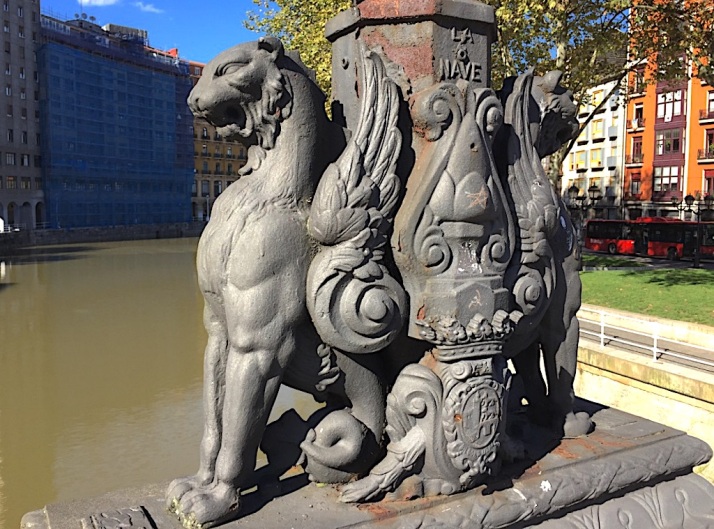 From the top of the rounded span, we could see the Mercy Bridge and its eight foundry lanterns. According to legend, rubbing the winged creatures at the base of its lampposts brings love and good luck. I felt silly patting this inanimate beast on the forehead, but complied before taking account of my many blessings. 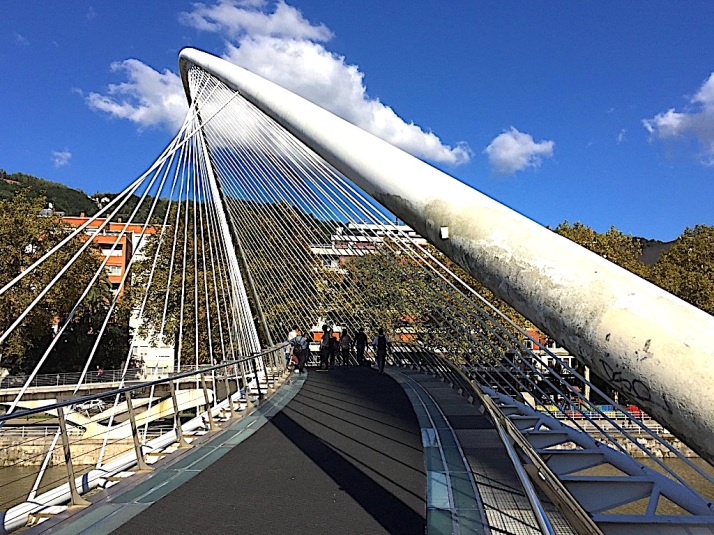 From here, we strolled on to the Zubizuri Bridge, a tied arch footbridge designed by the famed Spanish architect Santiago Calatrava. Painted white, the curved walkway supported by steel suspension cables has become a symbol of Bilbao’s renewal. 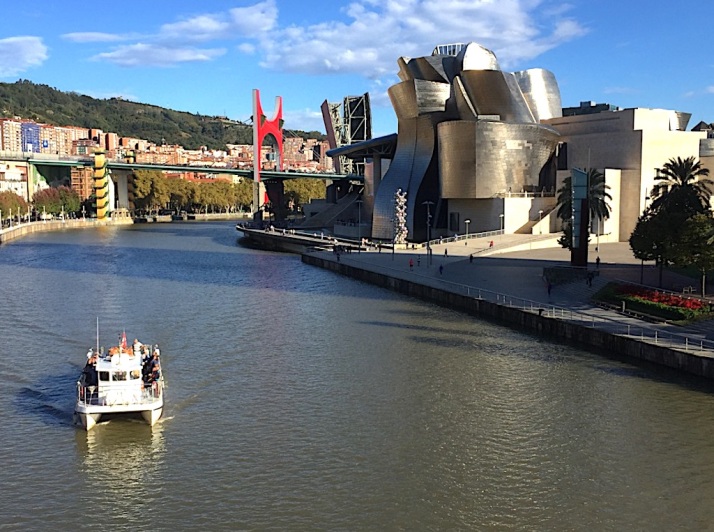 Bilbao’s rebirth was really conceived in 1997 with the opening of the gorgeous Guggenheim Museum. By far Bilbao’s biggest tourist attraction, this titanium clad contemporary art museum attracts a million visitors a year, and has become a case study in urban renewal known as the “Bilbao Effect”. 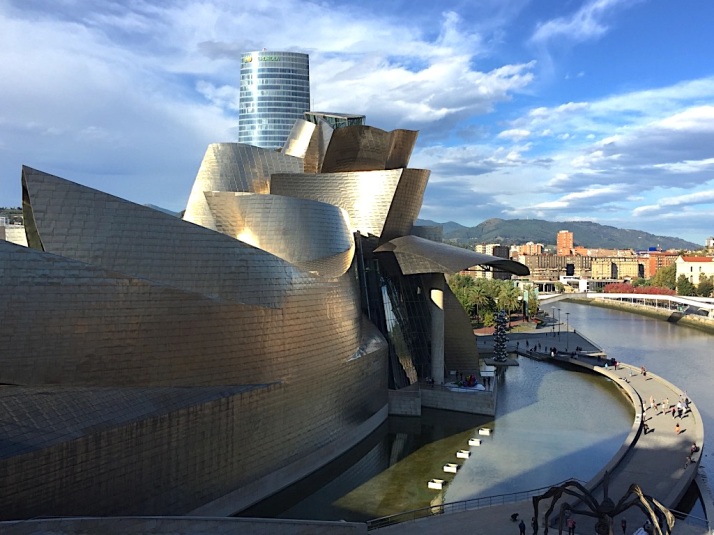 For an excellent elevated view of the Guggenheim, we scaled the La Salve Bridge, the first cable-stayed bridge in Spain. While going gaga for the Guggenheim, we also admired the bridge’s great red gate installed during the 10th anniversary of the museum. 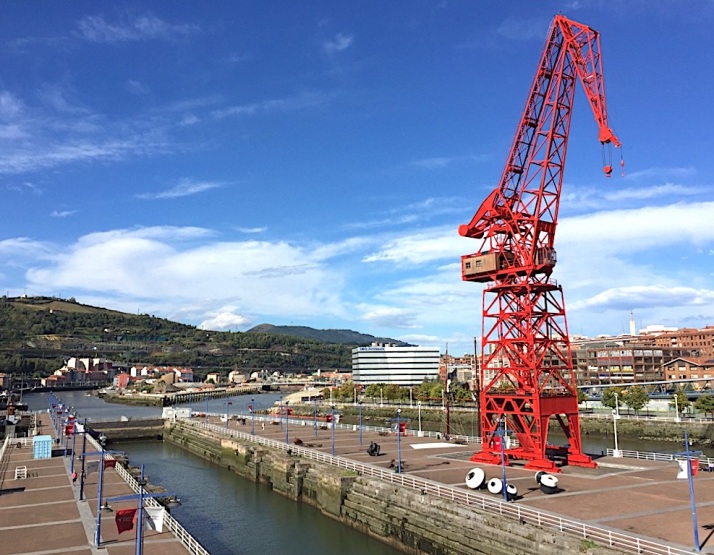 From the Guggenheim we passed a footbridge made with Brazilian wood decking, a drawbridge formerly used for shipyard operations, and the Euskalduna Bridge overlooking the dry docks. All of the bridges we walked past in Bilbao were unique, functional and beautiful, but the best was still to come. 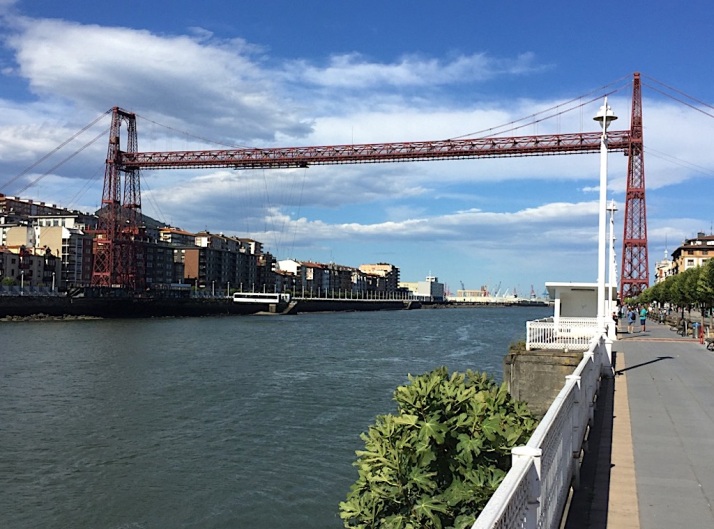 To reach our final bridge in Bilbao, we boarded the city subway and traveled downstream to where the Nervión River flows into Abra Bay. Here, we found the Vizcaya Bridge, and paid a mere 40 cents to cross the river on a hanging segment of roadway. 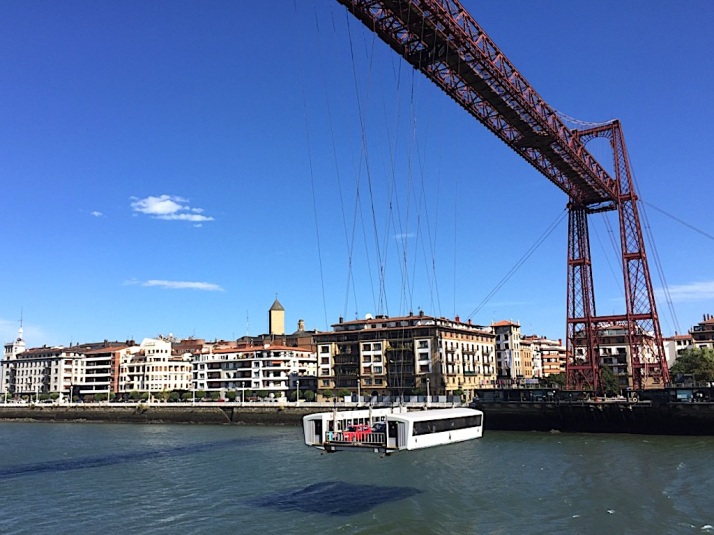 Crossing the Nervión River on the Vizcaya Transporter Bridge

Completed in 1893, it was the first bridge in the world to carry people and traffic on a suspended gondola. With fewer than two dozen ever built, this rare transporter bridge designed by Eiffel disciple Alberto Palacio, still makes the 90-second crossing over one hundred times a day. 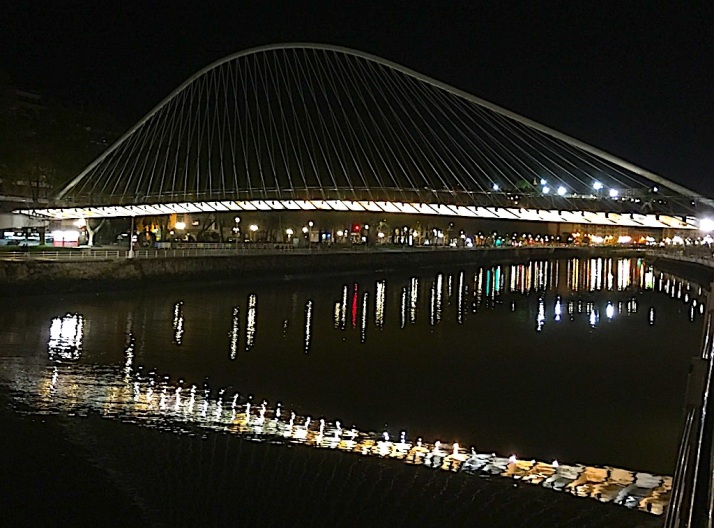 Reflections of the Zubizuri Bridge

After crossing the Nervión River one last time, we have now moved on to Madrid. With all the fun and interesting adventures this past month in the Basque Country, it is fitting that we captured our finishing reflections from the bridges of Bilbao. 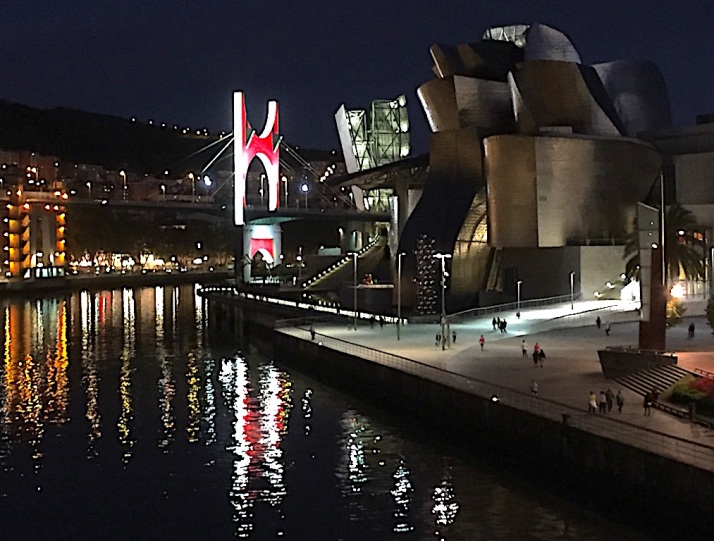 11 thoughts on “The Bridges of Bilbao”